Without much fanfare that is indicative of many small indie releases, developer Smoking Wolf finally releases One Way Heroics Plus on Playism. More of an enhanced standalone version than sequel, the game features a slew of new improvements and additions that can be considered both big and small, but never completely change the nature of the game. So does this new entry manage to take this quirky roguelike to new heights?

If you read my review of the original of One Way Heroics then it should be no surprise that the game quickly became a fast favorite of mine from last year.  Coupling the rougelike genre with side-scrolling mechanics and some RPG elements in its veins to boot, the finished product was a really competent game that both spurred on a sense of urgency in order not to be swallowed by the encroaching darkness, yet also excitement as you push forward against enemies, find items, and eventually try to reach the end of the world or take on the fearsome Demon Lord. In a sense, One Way Heroics Plus isn’t all that different from its predecessor – allowing the player to transfer over progress made that includes: unlocked classes, items in the dimensional vault, records, and other miscellaneous details if desired. While there are tons of new items added into the game, everything from the old game is still obtainable, so no need to worry if you don’t have the save data on hand or starting fresh. Even for those carrying progress over, the playing field will still be a very equal one thanks to the addition of new mechanics that not only make things slightly tick up in difficulty, but also more enjoyable as well.

Now you can pay away your transgressions just like in the Medieval period. 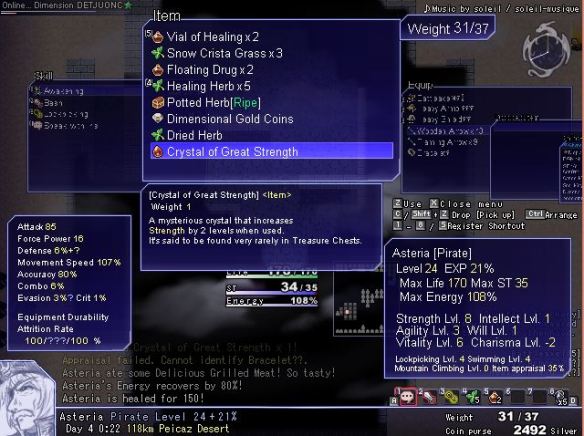 One of the most noticeable changes has been made to food items that will now spoil after a couple of days in-game and other various factors. While consuming spoiled food will still replenish energy, it will recover less of it and has a chance to inflict food poisoning, a status that temporarily lower the character’s combat abilities for a few turns . The only way to remedy it is to outlast the status or use an antidote herb. Different foods also have different rates of expiration, so I do like how this does encourage the player to be more thoughtful in what they pick up and simply not just hoard items like you would in the previous title. Of course, there are also plenty of new shops and NPC’s that offer a wide variety of services – everything from helping you clear your bounty/sin level to those that will teach you new useful skills. Out the ones that I have come across, my favorite new shop would have to be the Bar, a place where you fill up on food, but also recruit NPC’s for hire. These called “Cooperative NPC’s”, units that can act independently of you opposed to Allied NPC’s that follow close behind you. Co-op units still do follow your lead, but have greater flexibly in combat, such as being able heal themselves with items you provide when things get dangerous and taking advantage of terrain bonuses like the player would. And trust me, with new enemy events introduced like Intermediate Bosses (basically one big bad surrounded by minions) and even cursed enemies (get close to their aura and gain a status infliction for a couple of turns), there are no shortage of precarious challenges to face.

One of the new allied units you can recruit.

Aside from a multitude of random events too numerous to go over in detail, there a lot of other aspects that are worth mentioning. Excluding the addition of 3 new character classes, new hazardous, and perks (some that can even make the game harder for yourself) – another major update to the game is called Castle Renovations – the ability to change the look and feel of the starting area as well as invite new residences. While this might not make much sense as castle will be gobbled up into the darkness, the system actually allows for changes to the gameplay like unlocking the aforementioned classes or even opening new events depending on the residences you have in castle. All you need to do is construct rooms and put residences in different areas, and you customize the game greatly apart from the standard “Defeat the Demon Lord” and the like. However, in order to make the rooms and invite the residences – you need a special currency called “Dimensional Gold Coins” that can only be found randomly throughout any play session. There are some surefire indicators of getting coins like killing monsters or trading with villages (or even kill them) that glow gold, but most of the time it is based on random luck, and the odds varying on circumstance. After that, either complete the session or die, and you can use the coins at the start of your next run. Not exactly what I would was hoping for in terms of mechanics to improve the game, but still a neat system that manages to add some much needed life into a few humdrum play sessions and actually compliments the style.

Adding residences to the Castle will unlock new features to the game….if you can get the Dimensional Coins… 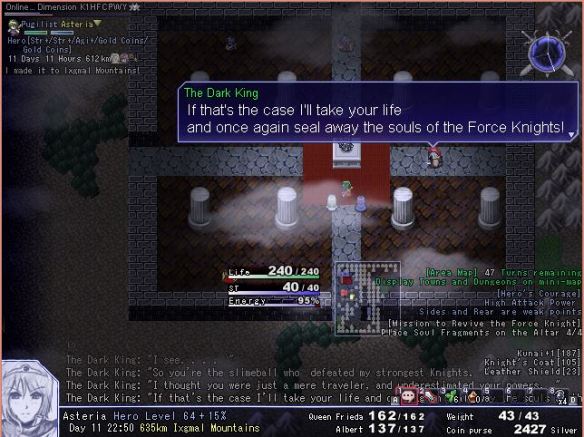 With so many more features added into the game that I can’t even begin to explain in full detail (I.E: keyboard shortcuts, more stat visibility, emergency save function, etc), I will say that One Way Heroics Plus is a real treat and a good example of a standalone expansion done right without completely changing the natural, simple, and sometimes complex flow to the game that makes so enjoyable in the first place. Only spending 2 weeks on this game, I still feel that I haven’t seen everything that there is to see and the more I dig into the new character classes and events, I still feel like I would need more time to see it all. I really do like it when games can fill me with that kind of wonder, and can say for sure that I will spending plenty of time with One Way Heroics Plus later on in the year and think you should give it a try, too.

Pros: A ton of content updates added onto the original, a standalone version that allows switching between the two games (if you have the original), improvements made to the existing game mechanics, a wealth of new items to use, new perks can add difficulty to the game, Castle Renovation system is a neat idea, keyboard shortcuts, support for controllers  (recommend).

Note: While the game is only available on Playism at the time of writing this (5/16/2015), it will be coming to Steam sometime in the future. If you do purchase the Playism version, you will get a free Steam Key upon its release.